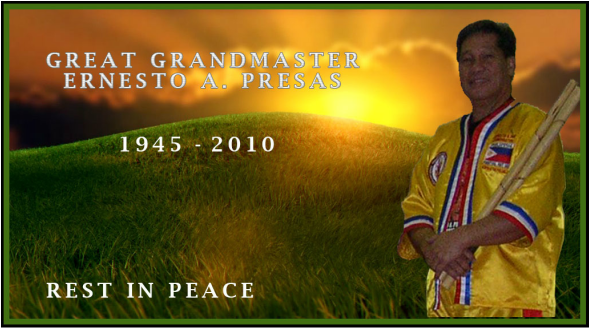 Ernesto was one of the last of the Presas family. He had all the skills of his father and brother as well as his own knowledge and skills. He was a humane person and kind to people. He started his spectacular career in martial arts at the age of 8 with his father Jose. His training history is remarkable and Ernesto adopted several skills up to master level.

Ernesto succeeded in what most only dream of. He developed two martial art styles and made them internationally known and praised. Kombatan, based on armed skills, and Modern Mano Mano, based on unarmed skills, are the products of Grandmaster Presas’ work and will live in the history and future of martial arts. He published several books and was awarded the Grandmaster´s Award –trophy, which is awarded only to the great internationally known people in martial arts circles. In 1975 he founded the International Philippine Martial Arts Federation, which purpose is to spread Filipino martial skills all over the world. He was also known as the ”father of Mano Mano”.

The greatest honor for a martial arts master is that masters from other arts want to learn from you.>
Grandmaster Presas was known for this and he was highly respected in all martial arts styles.

We all, especially Kombatan and Modern Mano Mano teachers and students, will miss the great Grandmaster.
Thank you for all the inspiration, teachings and kindness you have given us.

Let us cherish the memory of the great Master by continuing the work he has begun and by developing our knowledge in his styles to a higher degree. The legend will live through us all now and forever.

Rest in peace, we all miss you.